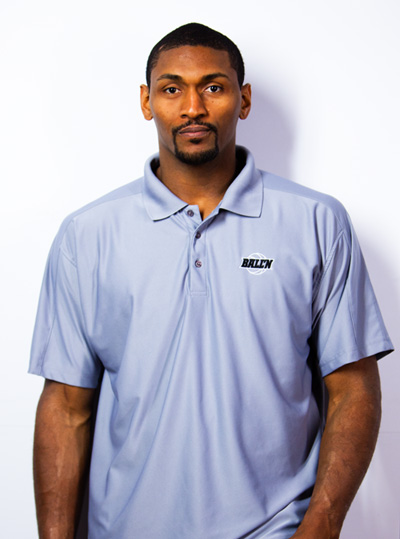 Born Ronald William Artest Jr. on Nov. 13, 1979, in Queensbridge, New York, Metta is the father of four children. He was signed to a five-year contract by the LA Lakers as a free agent on July 8, 2009 and has been playing professional basketball in the NBA since 1999. He was selected to the 2005-06 NBAs All-Defensive Team, was voted by the media as 2003-04 NBAs Defensive Player of the Year, and was the only man with 271 steals in his first two seasons in the NBA, breaking Michael Jordans record. He won his first NBA World Championship with the LA Lakers in June, 2010, and received the J. Walter Kennedy Citizenship Award - the NBAs highest citizenship and community service honor - in April 2011.

World Peace played high school basketball at La Salle Academy and college basketball at St. Johns University from 1997-1999, majoring in mathematics. He gained fame playing in some of New York Citys high profile summer basketball tournaments at Nike Pro City, Hoops in the Sun at Orchard Beach, Bronx, NY and Dyckman Park at Washington Heights. He earned himself nicknames such as Tru Warier and The New World Order, a name he received from Randy Cruz. World Peace was named a McDonalds All-American as well as the Co-Player of the Year in New York City and the State of New York as a high school senior at La Salle Academy. He teamed with Elton Brand and Lamar Odom on the same AAU team as a teenager.

World Peace was selected by the Chicago Bulls as the 16th pick of the 1999 NBA Draft. In his career he has also played for the Indiana Pacers, Saramento Kings, Houston Rockets, and now the Los Angeles Lakers. Artest won his first World Championship ring on June 17th, 2010, after the Lakers defeated the Boston Celtics in Game 7 of the 2010 NBA Finals.

World Peace has remained an active contributor in his hometown and in the cities of organizations for which he has played, working simultaneously in global regions that require urgent humanitarian aid. He formed a nonprofit in August 2007, entitled Xcel Universtity, to officially organize and streamline his charitable contributions and community endeavors under one umbrella.

World Peace joined a contingent of representatives from the NBA Players Association and the Feed the Children program on a goodwill mission to Africa in July 2007, helping to distribute more than one million meals to impoverished areas in Nairobi as part of the NBPAs Feeding One Million campaign. He reunited with the Feed the Children program for a mission to Central America in August 2007, delivering rations and supplies to deprived areas throughout Honduras. Artest paid for the costs of setting up an HIV testing clinic for Project Contact Africa in Nairobi, Kenya in 2007, and in 2008 made another donation to pay for HIV testing supplies and the salaries of lab technicians for the year.

World Peace became a spokesman in the PETAs (People for the Ethical Treatment of Animals) A.B.C. (Animal Birth Control) campaign in 2007, which is ongoing today. He sponsored a spay and neutering program of Pit Bulls at the Sacramento chapter of the SPCA, personally covering all costs for each pet owner, and is a celebrity supporter of Best Friends Animal Society. In the fall of 2008, Metta launched The Artest Math Masters program at Felix Cook Jr. Elementary School in partnership with the Houston Independent School District, which rewarded students who maintained high grades in Mathematics during the 2008-2009 school year.

In fall 2010, Artest decided to raffle off his 2010 NBA World Championship Ring, with the proceeds going to his nonprofit, Xcel University. The online ring raffle, which concluded on December 25, 2010, raised $651,006. Funds raised through the ring raffle were earmarked to be donated to nonprofits that provide mental health therapists and mental health services to those who wouldn be able to otherwise afford them.

World Peace has visited dozens of community centers, schools and libraries in low income areas of numerous cities throughout his career, speaking to kids about the virtues of education and a life devoid of violence and drugs, and on the importance of getting a college education. He has played in several Wheelchair Charities, Inc. Basketball Classics in New York City, which raises funding to assist paraplegic, quadriplegic and amputee patients. He sponsors summer basketball tournaments in the Queensbridge Projects in New York City; sends kids from Queensbridge to summer camps; and pays tuition for kids from Queensbridge who show academic promise to attend private schools.